Unreleased high quality recordings of the italian experimental trio Futuro Antico. The sound experience it’s a mysterious synergy between the elements of Nature, a magical encounter between different souls but with elective affinity. Maioli’s ancient and ethnic wind instruments are the breath of the Air, Sinigaglia’s electronic spirit produces liquid sequences of the Water, while Dabiré’s african percussions materialize the voice and rhythms of the Earth. The result is a total creative Fire, a foamed core of perceptions and multiple sensory universes of distant memory. The dialogue between archaic and futuristic already investigated in the historic “Dai Primitivi All’Elettronica” sees here another bright episode in this unreleased live, the music recorded on tapes directly by the mixing console is the result of the memorable performance held in Bologna at the festival Isole Del Suono on 17 July 1980. The secret harmony between sounds is complete but at the same time brings out the expressive specificity of the three individual personality: the subtlety of reiterate sonic textures; waterfalls of minimalist piano; Sufi atmospheres supported by sequence of organs that reinterpret the frequencies of harmoniums lost, the solemn gait of an African balaphone absorbed in electronic vortices endless…these are some of the coordinates of a musical and cultural poetics that after years continues to wonder for his source of formal purity and multiplicity of stimuli. 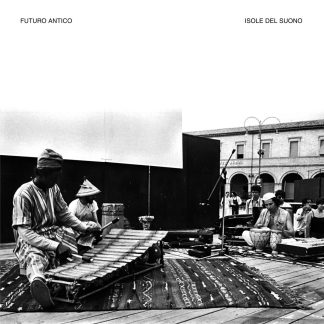 You're viewing: Futuro Antico
Isole Del Suono 16,00€
Add to cart
We use cookies on our website to give you the most relevant experience by remembering your preferences and repeat visits. By clicking “Accept All”, you consent to the use of ALL the cookies. However, you may visit "Cookie Settings" to provide a controlled consent.
Cookie SettingsAccept All
Manage consent