Mohi Bahauddin Dagar is the heir to one of the most important families of musicians in the Indian Hindustani tradition: Dagar family. During the XX century, his father, the famous Ustad Zia Mohiuddin Dagar, was mainly responsible for the revival of the Rudra Veena as a solo concert instrument. The stylistic evolution of the Rudra also involved a substantial modification of its parts by Zia Mohiuddin. In fact, the tumbas (gourds) and dhandhi (hollow neck) were enlarged to create greater resonance and closeness to the techniques used in Dhrupad singing. Ahir Bhairva consists of a mix of two morning Raga in its classical progression of alap, jor, jhala and chowtal phases, in a sound framework embellished by tanpura and pakhawaj. Bahauddin remains faithful to the stylistic features of Dagarbani thought, a slow meditative development that explores all the possible ranges of his instrument, with ascending and descending microtonal movements that reactivate body and mind in the first light of day. Originally released on digital edition by Country & Eastern. 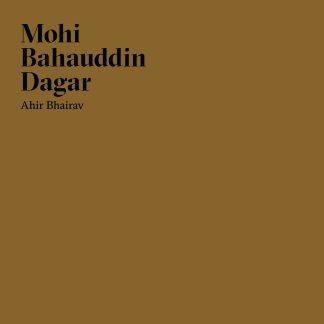 You're viewing: Mohi Bahauddin Dagar
Ahir Bhairav 24,00€
Add to cart
We use cookies on our website to give you the most relevant experience by remembering your preferences and repeat visits. By clicking “Accept All”, you consent to the use of ALL the cookies. However, you may visit "Cookie Settings" to provide a controlled consent.
Cookie SettingsAccept All
Manage consent