If «Conversations» celebrates the memory, the artistic and spiritual heritage of bassist Fred Hopkins, – an historical member of the revolutionary AACM of Chicago – who died in January 1999, it also marks the amazing collaboration between the Ritual Trio of Kahil El’Zabar (with Ari brown and Malachi Favors) and the intrepid veteran Archie Shepp, the great voice of the ’70 afro-free-jazz. Being a tribute that invites to an intimate memory, almost an antidote to exorcise the loss of a brother, the music is spiritual hymn to life. Between ballads, hard-bop and free-improvised accents, blow winds of vibrant pianistic chiaroscuros, which reminds the best Mccoy Tyner in the great blinding quartet of John Coltrane in the 60’s. Furthermore, when an angular rhythmic base decisively follows the typical hypnotic ostinato of the ancient tribal rituals, the voice is expressed in the purest black spirituals (Big Fred and Brother Malcolm), pervading some moments of that “Holiness” culture dear to the dawn of Afro-American identity. Here, Shepp brings back the flaming shivers of the golden age, when his message of freedom resonated the true spirits of primordial Africa. 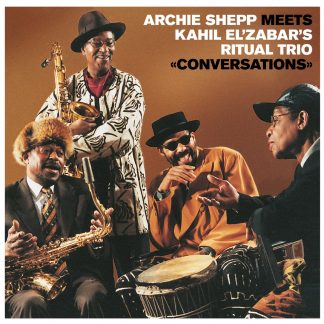 You're viewing: Archie Shepp & Kahil El’Zabar’s Ritual Trio
Conversations 24,00€
Add to cart
We use cookies on our website to give you the most relevant experience by remembering your preferences and repeat visits. By clicking “Accept All”, you consent to the use of ALL the cookies. However, you may visit "Cookie Settings" to provide a controlled consent.
Cookie SettingsAccept All
Manage consent