The Collective Orchestra was a visionary, short-living creative music collective led by Gaetano Liguori, who was one of the main protagonists of Italian free jazz since the early 70s. It was an important attempt to put together young musicians from the two main towns in Italy, and its respective leading figures: Giorgio Gaslini in Milan and Mario Schiano in Rome. Previous attempts to set up anything similar were, in fact, either frustrated by rivalries between the various personalities or were destined to be one-off events.Liguori’s vision is simply wonderful here – even bolder and more expressive than on his previous works for PDU, and the energy which he summons and transmits throughout is just extraordinary. The near-telepathic interplay of the core set of Gaetano Liguori on piano, Roberto Bellatalla on double bass, Filippo Monico on drums, Guido Mazzon on trumpet, and young musicians Edoardo Ricci, Giancarlo Maurino and Massimo Urbani on soprano and alto saxophones, is given a richly expanded sound palette by the addition of Danilo Terenzi on trombone, Roberto Del Piano on Fender bass and Sandro Cesaroni on flute.There’s something really magical about the reciprocity that occurs when he plays these exceptional improvisers – and the album’s still has a “sense of the new” feel (after 40 years!) that’s as gripping as anything recorded by Italian ensemble around the same time.The sound is strong and freely exploratory, at a level that’s completely fresh and very striking, and handled here with a wonderful balance between playful arrangements and fierce improvisations. Filled with power and imagination and originally released in 1976 on Pdu. 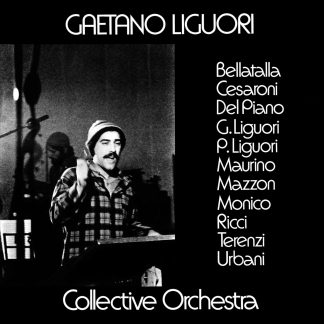 You're viewing: Gaetano Liguori Collective Orchestra
Gaetano Liguori Collective Orchestra 14,00€ – 16,00€
Select options
We use cookies on our website to give you the most relevant experience by remembering your preferences and repeat visits. By clicking “Accept All”, you consent to the use of ALL the cookies. However, you may visit "Cookie Settings" to provide a controlled consent.
Cookie SettingsAccept All
Manage consent